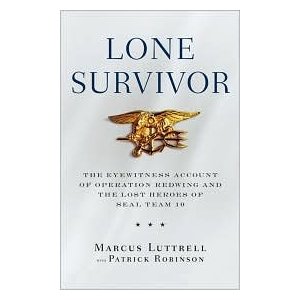 Due to my attention deficit disorder I usually don’t finish a book, I get so bored with it. I won’t even pick up a book unless I have a recommendation from a reliable source that it's good. So I found it on Amazon and bought it (used) at least two years ago, and there it’s sat on top of a stack of books I plan on reading. I literally couldn’t put it down, once I started. I stayed up until 1 or 2 am a couple nights in a row not able to find a good place to stop and go to bed. I don't cry very often. I don’t have anything to cry about (Thank you Lord and knock on wood), until I read something like this true life story about the treacherous acts of heroes dying to save their country, to save us, to save me. I cried.


This book is about one such hero who survived (I believe) because God wanted him to come back and tell us what happened.


I’ve always had an interest in the Special Forces ever since I joined the U.S. Navy and spent four years working at the command that trains these men. I’ve wanted to read factual publications about what they have done for us when they’re out on these dangerous missions in foreign places in the world where there’s turmoil and where murderous people who hate the U.S. plan and train to come to our country and kill as many of us that they can.


I will only read non-fiction because I want to find out the truth, and I do sit back here in my secure place in the U.S. ignorantly not knowing what is really going on in the world, not trusting the media that is supposed to be neutral, reporting only the news, only the facts, because so many times they have been proven to only report what they want to report, and not checking out the facts before reporting.


Millions of people go through their every day lives not knowing that events like the one described in this book are happening at the same time, in other parts of the world, for them so they can be safe in their country, in their states, in their cities, in their homes, at their jobs, at their parties, on their holidays.


Whilst we do sit back in our comfortable homes, workplaces, going through the daily things we think are so important to get done, actual heroes (men) are dying for us, dying trying to keep the people of the U.S. safe from people in other countries that want to hurt us.


This was written by one survivor. He knows and I know that he was saved by God so he could come back and be able to tell his story.


What I hope and pray is that future Special Forces personnel will never let what happened here, happen again, no matter what they have to do, so that they'll come back alive. They should continue to do what they’ve been trained and taught by the military, and not give a damn about what the liberal, unethical, biased, media and politicians say or do back in the U.S., that they are over there protecting. These men would be alive today if they hadn’t given a second thought to ROE (rules of engagement). Now all of them dead except for one lone survivor who will never be able to get the memory of what happened out of his head for the rest of his life because he let the liberals influence his actions. I pray that Marcus will fully recover, physically and mentally from the tragedies he has had to endure protecting our country.
Posted by tnahowru at 7:29 AM 2 comments:

Another find on Facebook. What would we do without this world wide web social society. Mikki is very HOT right now. This is her latest from her blog entitled Urchin Wings. 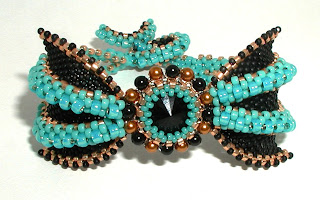 It reminds me of a bracelet and a dragon at the same time. The wings look like they have wire threaded through them, but it's actually copper seed beads. What else? See more on her blog, or gallery. I just can't stop staring at it.
Posted by tnahowru at 5:01 PM No comments:

tnahowru
In 2000 a co-worker showed me an amulet necklace she had beaded and I was immediately obsessed and wanted to find out all about beading. I found the Shepherdess run by Marcie Stone where they had tons of beading classes all year round. I took classes from sooo many popular teachers for six years. I couldn’t wait for classes to start so I bought books, beads, and tools so I could get home and start to bead. Annette Maggiora working at the Shepherdess helped me pick out colors for my first project, a bracelet from Diane Fitzgerald’s Zulu Beaded Chain Techniques book, and I’ve been hooked ever since.